Posted at 01:00h in Worldbuilding by Yukikaze
2 Likes

We’ll have a great announcement on Friday the 24th to kick off our last week – but for now, the AMA will be your last chance to ask your burning questions to the devs. We’ll announce the specifics of the AMA in our next Friday update.

We continue to move forward and cleared one more AF goal along the way, so we don’t mind telling you… some of the best goals are at the end. These are the expensive ones and will be further apart than any of the smaller goals in the middle. We hope these can be reached, but it will take a very strong last week to get there.

This stretch goal will allow players to undertake side story quests from the Bureau of Investigation. As the predecessor to the FBI, the BOI served as the foundation for standard investigation procedures still used today, such as crime scene preservation, fingerprinting, voice recognition, luminol reactions, and criminal profiling.

“As they say, truth is stranger than fiction. And sometimes, things happen in our world that defy all explanation. Well, Matthew, what do you say? Mind taking some time off your main mission to help us solve some other cases on the side? We’ll give you full access to all our state-of-the-art technology, of course…”

This will add a system to the game in which players can raise Baby Cthulhu, Penny Blood’s mascot character. You’ll be able to feed your Baby Cthulhu the blood and flesh of specific monsters as well as minerals to help it grow stronger. The barrier Baby Cthulhu emits has the ability to neutralize the power of Umbra and the Ruinwalkers, giving players advantages in battle. Helping your Baby Cthulhu reach maturity will also guide you further toward the game’s ‘good’ ending.

“What?! That baby octopus went missing? I told you to keep an eye on it… We won’t be able to open the doors without that thing! This will highly limit our mobility… Who was in charge of its food today? Me? Oh, it was me…? ****…”

Chinese and Korean languages will be added to the game.

We are 2 full days into our community game battle and things are not looking great. Neither team has been able to complete a goal leaving those additional art pages in the standard art book and the double sided art in peril! We knew these would be tough battles but really hope you can help our heroes pull through!

The results of the Penny Blood Goliath character design vote are as follows!

Goliath Design A is our winner! Thank you so much for voting, everyone! 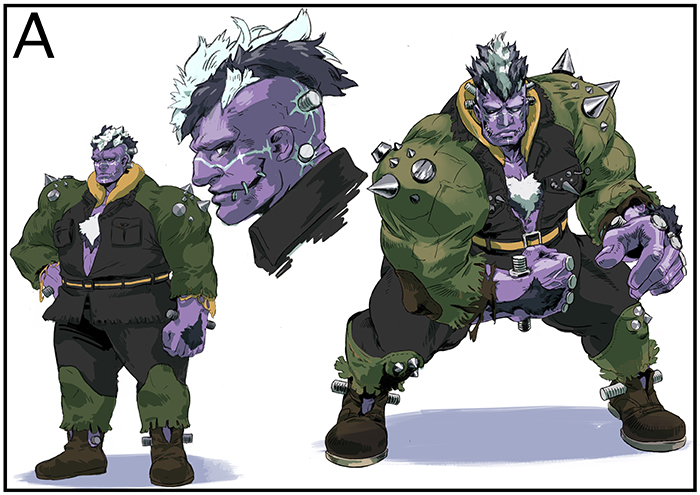 We’ve had a lot of questions about Discord Roles so let’s explain what they are and what you can do! First off, if you haven’t joined the DIscord, we strongly recommend that you do. You can talk with other fans, sometimes catch the main creators doing AMAs, and even participate in a wide variety of contests, votes, and challenges.

Initially we have 3 roles:

・Pathfinder – This is a role you receive from backing any Armed Fantasia reward tier. This marks you as one of the original backers that helped bring this game to fruition! Many non-backers will be joining the Discord as we develop and launch the game but this role tag is your proof that you were a true-believer and you made this happen!

・Agent of the B.O.I. – The B.O.I. needs a few good people and this role indicates that you backed Penny Blood at one of its reward tiers. This will show the rest of the world you proved the world needs more gothic JRPG horror games from Machida Matsuzo!

・JRPG Fan – This is a reward role for any backer who supported both games either through combo tiers or combo add-ons. This shows you are here for the JRPGs! You may be a fan of one or the other but you found it in your heart to back both games! We will have JRPG channels on both the Armed Fantasia and Penny Blood servers that only backers with these roles can join. We will provide some early looks at some in game art/sketches/etc in this channel before making it public in the main Discord channels.

Q1) I ordered an AF reward and PB as an add-on. Will I get the JRPG Fan Role, the Pathfinder Role, and the Agent of the B.O.I. Role.

A1) No, you will have the choice of either Pathfinder and Agent of the B.O.I. OR the JRPG Fan Role. The only way to get all 3 roles would be to purchase both games 2 times and opt in to the Pathfinder and Agent of the B.O.I. role with 1 set of games and then chose the JRPG Fan role with the other set. Ideally we’d like to keep people to one role per server.

Q2) I chose a combo reward with both games but don’t want the JRPG Fan Role. Can I get the Pathfinder Role and Agent of the B.O.I. Role instead?

A2) Yes you can. You will chose this selection via the survey that it sent a few months after the campaign ends

Q3) Can I give my role to someone else (in case you bought multiple copies)?

A3) Yes, but you can only get one role per purchase unless you choose the combo roles, which allows you to get both the Pathfinder and Agent of the BOI role (one for each server) instead of the JRPG Fan role.

Q4) When will roles be assigned?

A4) As soon as we can, once the campaign closes and surveys have been sent out. It will probably take between 2-3 months.

Q5) Can you go into specifics for what content will be in the JRPG Fan channel?

A5) Since there could be different publishers that have different Discord server policies it’s hard to say but the goal will be to make sure this channel gets a few nice sneak peaks here and there.

As mentioned before, a lot of unique, grotesque monsters will appear in Penny Blood. When thinking about the monsters for this game, I came up with a ton of ideas in terms of what to name them and how they should look. For example, there’s the Motofuji, the monster that appears in the campaign video. The name ‘Motofuji’ actually has no direct connection with the wholly unique design we came up with… So, why is it called ‘Motofuji,’ then?

If you’ve played a lot of RPGs, you’ll be familiar with the names of monsters that often appear in Western style fantasy games, such as ‘goblin’ and ‘ogre’… But back in the 1920s, those names weren’t as commonly known as they are now – especially when it comes to Taisho era Japan. No one in Japan during the 1920s called anything a ‘goblin’ or an ‘ogre’… Instead, they were most likely using words like ko-oni, ō-oni, and youkai.

At the time, the most popular work of fiction that dealt with monsters and youkai was an epic novel called Nansō Satomi Hakkenden. It was written by Kyokutei Bakin in the Edo period, features a whole slew of different youkai, and ‘Motofuji’ is the name of one of the enemies in the story. Aside from the fusion monsters that Matthew can transform into, the world of Penny Blood will feature a lot of different monsters who appear from the otherworld, and ‘Motofuji’ serves as the codename that Japan’s sentinels use for these creatures. In Nansō Satomi Hakkenden, the ‘motofuji’ is a powerful, high-level youkai – kind of like a last boss. After crossing blades with the creature and barely escaping with their lives, that’s the name the warriors of Japan decided to bestow upon the elite creature.

Now, let’s talk about the design. The Motofuji has one especially interesting characteristic about it… You might have already noticed this when you watched the campaign video. Inside the monster’s mouth, there’s a human face… That’s the core of the Motofuji. 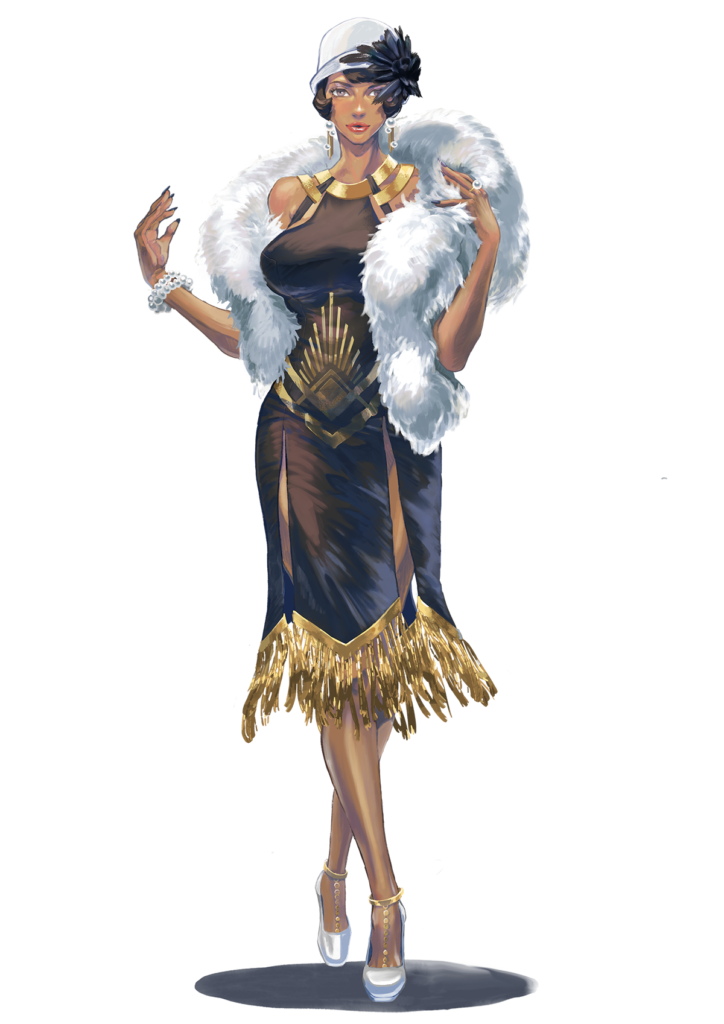 Born in Paris in 1893. Now 30, Roxane spends her days singing jazz and enchanting patrons in the underground speakeasies of New York. Roxane is also a dhampir, meaning she is half-human and half-vampire.

Normally, she appears to be nothing more than a songstress who uses her beautiful looks and voice to keep the customers coming back day after day… But when the evening deepens, she spends her time protecting the people of her city from villains and monsters.

In order to recover from the loneliness she suffered in France, Roxane spends a great deal of her time with Gus, her banjo player and the closest thing she has to a family member. She’s also often seen with Hoover, an agent from the BOI who always pushes troublesome tasks onto her.

A decade ago, Roxane first came to New York on the Titanic. Along the way, the ship crashed into an iceberg and sank, making Roxane one of the survivors. 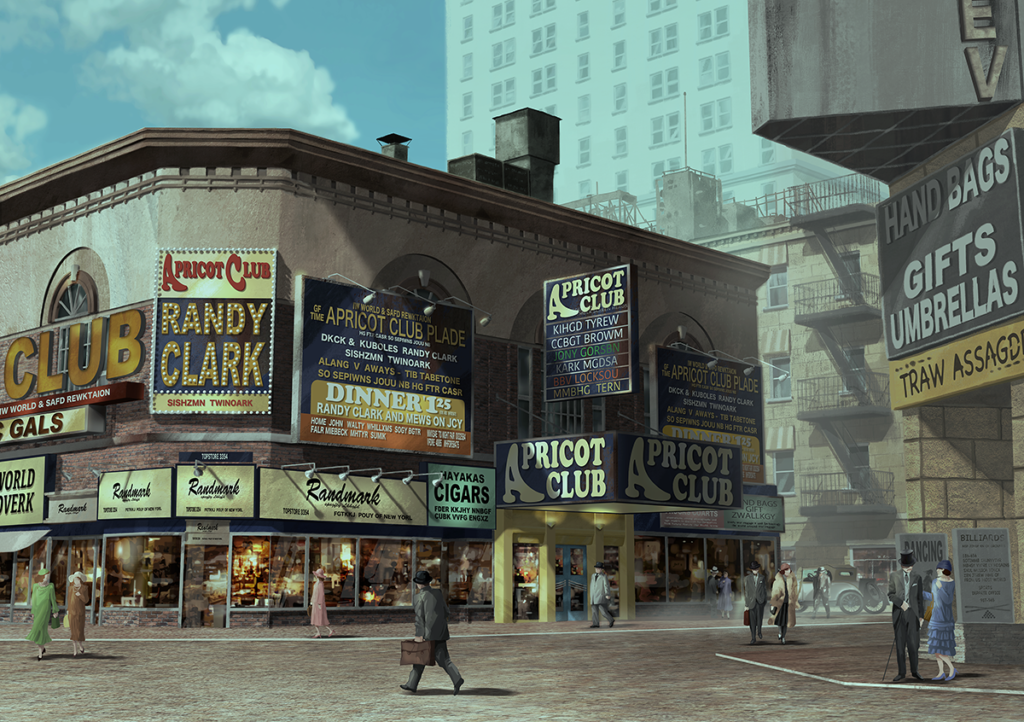 The Apricot Club is a brand-new luxury night club that just opened in Harlem, and it’s already become a popular night spot for many a New Yorker.

Regardless of the new Prohibition laws, patrons of the Apricot Club are free to indulge in all the alcohol they please as they enjoy a show at the club. Incidentally, the club is run by Owen Madden, a gangster.

“Do I know Matthew? That twerp’s like a little brother to me! Haven’t seen him around lately, though, so I was gettin’ kinda worried… Bastard promised me he’d take me out on the town with a dame who’s got some real pipes on her… But I haven’t heard from him in ages! The hell’s a guy supposed to do, eh?”

Owen rules the Manhattan underground, and lives in a far different world than those who walk in the light, but he’s managed to provide reliable support  to Matthew from the shadows.

Today’s side story is “The Devil In Me Blues” by Ari Lee.

*This story contains explicit content and is intended for adults.